You’ve had your eye on vinyl windows for quite a while now. You know they insulate pretty well and are the more cost-effective option compared to wooden windows.

This crossroads is one many homeowners have arrived at before. If you’re stuck between two window types, we’re here to help you decide. In this guide, we’ll share more details about Andersen Fibrex windows and vinyl windows so you can make a well-informed choice you’re happy with.

What Is Andersen Fibrex?

When these materials fuse, what you get are windows that promise two times more strength than vinyl. Fibrex windows are also resistant to peeling, blistering, flaking, and fading. They handle temperature fluctuations well, too.

Further, Fibrex is corrode-proof, and it won’t succumb to the growth of funguses. It also doesn’t decay or rot, instead maintaining its timeless look. There are even fewer volatile organic compounds or VOCs with Andersen Fibrex compared to other windows. This is because the company doesn’t paint the windows or use wood preservatives.

Fibrex is available in Andersen window series such as Renewal by Andersen, the 100 Series, and the A-Series.

What Are Vinyl Windows?

Next, we’ve got vinyl windows, an alternative to wood that many homeowners consider before a window replacement. These windows are sold by all sorts of manufacturers. Vinyl first came into production during the 1970s as a cheaper alternative to wood. Today, it’s still regarded in much the same way.

Vinyl windows have a PVC plastic base. They’re often white in color, although they’re available in other hues. Some can even be painted to match the rest of your home. Otherwise, you don’t need to do much other maintenance work. That makes vinyl a convenient option for many a homeowner who wants nice windows but doesn’t want to do a lot in terms of upkeep.

The average vinyl window has a lifespan of about 20 years, which isn’t too bad. There are more durable materials out there, though.

Their energy-efficient frames mean vinyl windows are a smart choice for the home, as they can reduce your energy usage and thus save money on your monthly bill.

Which Has More Strength?

If it’s a question of which of the two window types is stronger, it’s Andersen Fibrex without a doubt. As we mentioned a few sections back, these windows are designed with twice the strength of vinyl. That’s in part due to the thickness of the finish Andersen uses in all its Fibrex windows. According to the manufacturer, this has 12 times the thickness compared to painted vinyl.

The temperatures can climb to 150 degrees Fahrenheit and still Fibrex windows won’t buckle. You cannot say the same about your standard vinyl windows.

Through our research, it appears that vinyl windows and Andersen Fibrex windows both have a lifespan of about 20 years. If either of the two window types were to boast an even longer life though, that would be Fibrex.

Andersen feels so confident in its windows, doors, and other products that it offers comprehensive warranties. These include Owner-to-Owner limited warranties, which allow you to transfer the warranty from your old home to your new one should you move. Under the Owner-to-Owner limited warranty, you get 10 years of protection for all non-glass components and up to 20 years for glass.

If you’re looking to shave money off your window costs and installation, vinyl windows would seem like your best choice. While wooden windows may cost $800 to $1,000 each, vinyl is far cheaper. You’d only pay $450 to $600, and that cost does include installation. Again, that’s per window, but considering each one is up to $500 less than wood, vinyl windows let you remodel your home on a budget.

Andersen windows are on the pricier end, at least for the most part. In the Renewal by Andersen Series, you’d pay $885 to $1,750 per window. Their Architectural Collection A-Series, which includes both Fibrex and wooden windows, costs $1,000 to $1,650 each. It’s unclear if installation is factored into these costs.

We do want to note that the Fibrex windows in the 100 Series are only $185 to $315 each. That’s even less expensive than your standard vinyl window.

Choosing Between Andersen Fibrex or Vinyl Windows:  What to Think About

If you’re still on the fence about whether Andersen Fibrex or vinyl windows are the right choice for you, here are some factors to keep in mind:

Vinyl windows are made of a type of plastic that’s inexpensive and requires little maintenance. Fibrex windows, an Andersen exclusive, combine thermoplastic polymer with wood fibers to create a tough, durable window that can stand up to weather changes and other damage without showing any signs of wear and tear.

Hopefully, the information in this article helped you decide between Andersen Fibrex or vinyl windows for your home remodel. 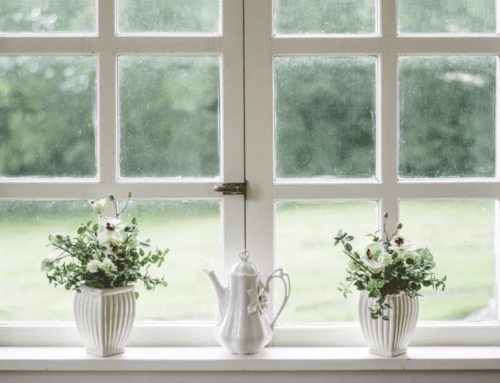