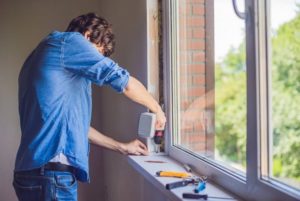 If you’re looking for new replacement windows in Chicago, Illinois, then Friendly Windows makes for a great choice. Here are some reasons our Chicagoland customers choose our window services again and again:

Chicago, Illinois residents are sure to feel it as the seasons change in the area. With very low average temperatures in the winter and scorchers in the summer, a getting new replacement windows is a good idea any time of the year. Here’s why.

If your windows are more than a decade old, then they’re not efficient enough to remain in your home. The lack of insulation means the windows don’t maintain their temperature. In the winter, you’ll shiver and shake each time you enter your house because of that strong chill. In the summer, your home becomes a sweatbox.

Older windows also tend to have gaps in the seals. These microscopic holes let in cold air during the winter and hot air in the summer. To combat the temperatures, you run to your thermostat, cranking up the heat or blasting the air conditioning. This may work to a degree, but you often face sky-high energy bills as a result.

If you’re ready for a change, then call on us at Friendly Windows. Our products have great Energy Star ratings. With more energy-efficient windows, you’ll notice a lot of great changes around your home. Your rooms will feel comfortable without you excessively using the heat or AC. This allows you to prolong the life of these units.

Also, with improved heat retention, you’ll want to spend time in all the rooms in your home instead of avoiding certain spaces. Now you can enjoy more quality time with your family in any part of your house.

Best of all is that an energy-efficient window replacement Chicago can pad your wallet. No longer will you pay high energy bills from overusing the heat and AC. Now that’s a win-win!

While you want functioning windows, you also care about the style. There’s no need to fret about appearance when you request your replacement windows Chicago through our team at Friendly Windows. We stock the highest-end windows brands on the market, including both Andersen and Marvin. The range of designs and materials offered between these two brands gives you great versatility. You can get windows you’ll love that save you money on energy bills as well. What could be better?

Chicago, Illinois, also referred to as the City of Chicago, has the largest population of all Illinois cities. It’s also one of the most populated cities in the entire United States after Los Angeles and New York. According to data from 2018, about 2.7 million people call this beloved city home.

The city’s history dates to 1837, when it first got incorporated. During the 19th century, growth continued quickly, but 1871’s Great Chicago Fire slowed things considerably. More than 100,000 people lost their homes, but the city’s residents were not to be deterred. They began building back what they had lost and then some.

This regrowth for the city had an unintended effect, drawing in even more residents. In 1900, Chicago had enough of a population that it was considered one of the biggest cities on the planet. Today, the area is known for its transportation, telecommunications, technology, education, industry, commerce, culture, and finance industries.

Up to 58 million people will visit the city in a year per data from 2018. As for residents, it’s estimated that 5.5 percent of them are Asian, 28.9 percent are Latino or Hispanic, 32.9 percent are African American or black, 31.7 percent are non-Hispanic, and 44.9 percent are white. This information comes from population data published in 2010.

People come from all over the world come to live in this great city. In an American Community Survey conducted between 2008 and 2012, several ancestral groups were identified. Each had at least 10,000 people in the city. These include Ireland with 137,799 residents, Poland with 134,032 residents, Germany with 120,328 residents, Italy with 77,967 residents, and China with 66,978 residents. Up to 1.72 million were considered “other groups” as well.

Chicago is a beloved destination for all sorts of entertainment, so you certainly have your pick. Here are some of our favorite places to go in the city.

If you’re on a budget, this zoo makes for the perfect day trip. It’s free to get in, although snacks and souvenirs do cost money. Educate yourself and your family on the lives of animals such as monkeys, reptiles, gorillas, penguins, polar bears, lions, and more. Over 200 animal species are represented here, with more than 1,100 creatures on display.

Another must-see spot in the city is Willis Tower, formerly known as Sears Tower. This impressive monument stands 1,450 feet tall and has 110 stories in all. It was at one time known for being the tallest structure of its kind on the planet.

Make sure you get to the Skydeck, the observation deck at Willis Tower. This is 103 floors up and lets you drink in unique views of the city from more than 1,300 feet. You won’t find a taller observation deck in the US. If the weather is good, you might even see parts of neighboring Wisconsin, Michigan, or Indiana.

If you’re looking for new windows in Chicago, give us a call today!